Successful research is not just about collaboration within Europe. Our world faces issues on a global scale, such as climate change, food security and disease prevention and treatment. 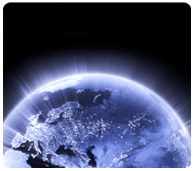 Since 2001, GÉANT has dramatically increased its global reach. From just a handful of European countries connected in 2001, there are now high-speed links to nearly 50 countries outside of Europe and to international networks spanning the world.

Working together, the combination of GÉANT, national research networks and international partners has created a truly global research community. Not only does this accelerate discoveries, new ideas and solutions, but it also enables researchers in less developed nations to collaborate and compete with peers throughout the world, bridging the digital divide and preventing ’brain drain’.

GÉANT’s impact extends way beyond Europe. It has acted as a template for other research and education networks that have been successfully built in areas such as Latin America, South East Asia and the Mediterranean.

Cultural shift and new challenges for researchers
In 2004 GÉANT became the first international ‘hybrid’ network, combining routed and switched infrastructure through over 12,000 km of its own optical fibre. This enabled the creation of a portfolio of new services for users – from different speeds to dedicated, guaranteed high-capacity connections.

This was a long way from 2000, when the research community was starved of high capacity connections as the capabilities of the commercial internet struggled to provide either the consistent speed or guaranteed capacity required. Consequently GÉANT’s first major successes were large scale science projects, such as radio astronomy and grid computing that needed the speed and capacity that the network provided. 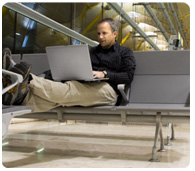