Currently offered as a pilot, GÉANT Open has been designed as a service to allow NRENs and approved commercial organisations to exchange connectivity in a highly efficient and flexible manner.

Facilitating collaboration has always been the cornerstone behind GÉANT, and GÉANT Open adds to the portfolio of connectivity services that the GÉANT network offers to its users.

The service uses a dedicated switch onto which all users can connect their own circuits at either 10Gbit/s or 1Gbit/s, and can then request interconnections with any other participant in order to provide inter-organisation connectivity.

This has particular benefits to international partners needing to manage multiple interconnections and wishing to harmonise their international circuits.  NRENs wishing to arrange private connectivity can also use GÉANT Open to facilitate these requirements.

As a first within the European Research and Education (R&E) community, approved commercial organisations will be able to connect to GÉANT Open. This enhancement will help R&E users to access a wide variety of commercial third parties as part of private/public research projects
Feature Highlights of GÉANT Open:

The service is currently being launched as a 12-month pilot with a view to launching as a full service at the end of this pilot phase.  During the pilot, aspects of the service such as support levels, resilience and further service enhancements will be developed, working in collaboration with those participating in the pilot.

The diagram below shows how services connected via an NREN can use GÉANT Open to interconnect with other networks, or with services offered by commercial third parties. 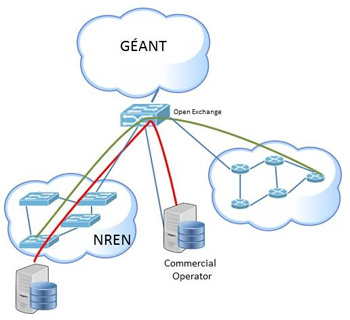 The current GÉANT Open switch is powered by two enhanced switch control boards capable of switching in terabits per second.

Initial connection to GÉANT Open will be available in 1G and 10G interface speeds but connectivity with higher capacity can also be supported by the device.  10G interfaces on GÉANT Open device are capable of terminating circuits with either LAN-PHY or WAN-PHY framing.  All interfaces are presented with 1310nm optical modules with LC connectors and have a maximum reach of 10 km on single mode fibre.

The MX Series 3D Universal Edge Routers are also highly flexible and capable of offering a wide range of deployments styles, architectural adaptability, port densities and choices of interfaces. They also have the high reliability required to support advanced and seamless services.